The best demo education It is a long established fact that a reade.

If you are someone who is studying programming as a university subject or you want to learn it without even going to University, in both the cases, you should learn JAVA which is the most popular programming language of all time. Java is a general purpose programming language famous for the concept “Write once, run anywhere”.

As of 2016, Java is one of the most popular programming languages in use, particularly for client-server web applications, with a reported 9 million developers. Java was originally developed by James Gosling at Sun Microsystems (which has since been acquired by Oracle Corporation) and released in 1995 as a core component of Sun Microsystems’ Java platform. The language derives much of its syntax from C and C++, but it has fewer low-level facilities than either of them.

Keeping in mind the need of basic training for local community (Urdu/Hindi), we have created a complete step by step video training course on Java Programming. All the basic elements of Java are explained by the instructor in this course. Course is created and instructed by Majid Mehmood a Punjab based young instructor working with onlineustaad.com under Wali Web Solutions.

Watch the video tutorial series of Java Programming in Urdu/Hindi, the list is from a playlist on YouTube, you simply play a single video and the next one will play automatically.

If you think the basic tutorials of Java Programming on this page are helpful then you might think purchasing the complete course that has a few small projects in Java such as Login Form and Calculator.

We aim to provide basic training for free since 2011, and at the same time we provide complete training courses in Urdu/Hindi for a small fee which is affordable for everyone. And this way, we can continue contributing to the local community using this website as well as YouTube channel.

The course contains all the basic materials such as variables, functions, OOP, Classes and every other basic feature that you can use while programming in Java language.

After the basics, there are some advance functionality which you can use to operate different tasks using Java Programming. That includes Keywords, Interfaces and Form Elements.

In the final chapter of the course, you’ll learn creating a small beautiful login form using Java, and that’s the first project in this course. The last project is to create a basic calculator in Java which can do the basic operations such as sum, minus, multiplication and division.

We intend to include a big project such as ATM (Automatic Teller Machine), but due to shortage of time and the length of the course, we skipped that. But still you can learn a lot from the course we’ve in hands.

If you have any questions or suggestions then please use the comment form below and let me know. I always appreciate your comments and suggestions.

How to Create & Sell Courses on Udemy?

How to Develop CMS Based Websites?

How to Create CSS3 Drop Down Menu in Urdu & Hindi 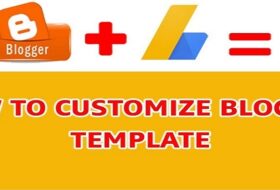 How to Customize each part of a Blogger Template in Urdu